Apparently I’m mistakanely PERCEIVED AS a Grammy nominated Recording Engineer FOR CarDi B.

The recent Capitol Hill hearings with Mark Zuckerberg of Facebook got me thinking about how I was being tracked by the social giants of our world, namely, Google, LinkedIn, Twitter and Facebook (Instagram included).

I began by going through my ad preferences under the –> settings –> Ads section of my profile settings in Facebook. I started deleting companies that had me tagged, and removing interests that I had no idea were there. I can only surmise they got there by Facebook scraping my gmail account and the many advertising related emails I receive. I certainly hadn’t clicked on all these companies ads. I did notice a similarity between companies that email me and those tagged in my FB ads profile.

In the capitol hill hearings Zuckerberg said if we opted-out of these ad preferences, our Facebook experience would get far worse. However, mine has improved greatly! Now I see posts from friends I had almost forgotten about since I’m no longer being bombarded by ads I didn’t care to see in the first place. Try it, you’ll see.

I also noticed the “Your Information” section. I have very little provided there beyond my relationship status saying “Married”. There is also a “Your Categories” tab under that section. When I clicked this I noticed a “Mulitcultural Affinity” section (see graphic). This has me labeled as “African American (US)”. Isn’t that interesting? I’m happy to see I have a multi-cultural affinity. 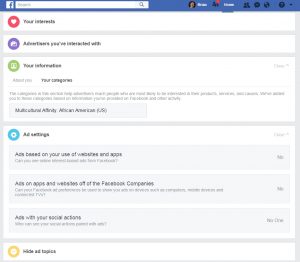 It got me thinking, why I would I be labeled with this “affinity”? I figured because I have social friends of many ethnicity’s due to my involvement in my business, which is very rewarding and allows me to meet and know people of many ethnic backgrounds all around the world.

But then I decided to “Google” myself. I was quite surprised at the first result in Google. It was a link to my LinkedIn profile, with a picture of someone who isn’t me (see graphic). Google apparently thinks this is what I look like; a handsome young gentlemen with a nice shirt and tie.

The picture is actually that of Michael Ashby, who recorded the highly publicized and popular recording artist Cardi B. Michael and I have had many conversations both on and offline over the past couple of years. I consider us good acquaintances if not friends. My company had also released a press release with this photo of Michael. Did Facebook get my “Multicultural Affinity” from a picture on Google results? Maybe, maybe not, but it does give the perception that Michael is me.

Have Google and Facebook been scraping my data and incorrectly identified me as Michael Ashby?

I guess I’m now a Grammy nominated Recording Engineer for one of the hottest modern recording artists in history, in addition to being the owner of a microphone company.

What is alarming to me in all this is that we are living in an era where computer algorithms are running wild and generating our personas, without our control, and obviously falsely at times. As much as I’d like to turn back time a couple generations and have that young energy again, I’d rather just like to be presented as me, and not someone else.

In the mean time, I look forward to the Grammy’s sending me a trophy when Michael wins. I’ll be sure to forward it on to its real persona when it comes…