Dating Nails – Does this nail tell me how old this painting is?

In the past couple years I’ve been delving deeper into collecting art. As with anything new you learn more and more as you go and hopefully not make too many expensive mistakes. Start low and slow, right? With my previous collecting venture, vintage bicycles, I tried to finance the hobby by flipping a few things here and there, I actually did quite well and probably came pretty close to even, not including a couple unforeseen issues, like 40 year metal breaking, making a bike nearly worthless. Anyway… 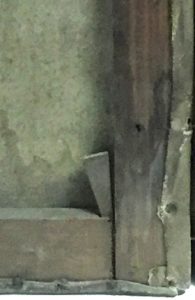 Bottom back corner of one of the paintings.

I recently picked up a couple, I was hoping, old oil paintings. The seller did not list the artist, the photos were sub-par, but I could very faintly make out a signature in one of the photos. This is where my Photoshop skills come in handy, image manipulation can really bring out a signature. After a few late night hours of research I thought I had the artist figured out, so I took a risk and bought them.

My hope was, they were by an artist born in the mid 1700’s. After researching how to date paintings etc. I became fairly confident they were at least 1800’s, but could they be as far back as 1700’s? This I wasn’t sure about.

First, it looks like they may have been restretched on the later wood, or some of the nails had been replaced. Some nails, brads really, seem newer than others. But, the oldest nails, in the corners mostly, seem pretty old. I carefully removed one nail where there were three on a back corner. Once I pulled it out I got a little excited, it certainly doesn’t look modern… 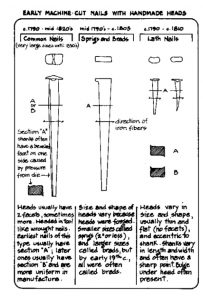 Image from University of Vermont

A quick search on Google revealed a plethora of sites on nail history. And from what I can tell, they look like what are called Early Machine Cut Nails with Handmade Heads, also called Lath Nails circ. 1790 to 1810. If they are in fact that old, this could date my paintings back to 1700’s early 1800’s and could in fact be the artist I’m hoping. Time will tell, as I will flip these paintings. 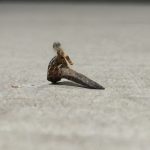